GBPUSD continued to decline in the morning trading on Friday, and recorded the second consecutive daily loss, to reach its lowest level in two weeks. This decline comes after the weak data issued by British retail sales, which recorded the lowest growth rate since January 2021, which reduced speculation about a British interest rate hike during the next meeting in February.

The GBPUSD pair traded at $1.3558, the lowest in 11 months, losing about 0.3% from the opening level of today’s session at $1.3598, and the British pound closed trading yesterday, Thursday, down by 0.1% in the first daily decline. 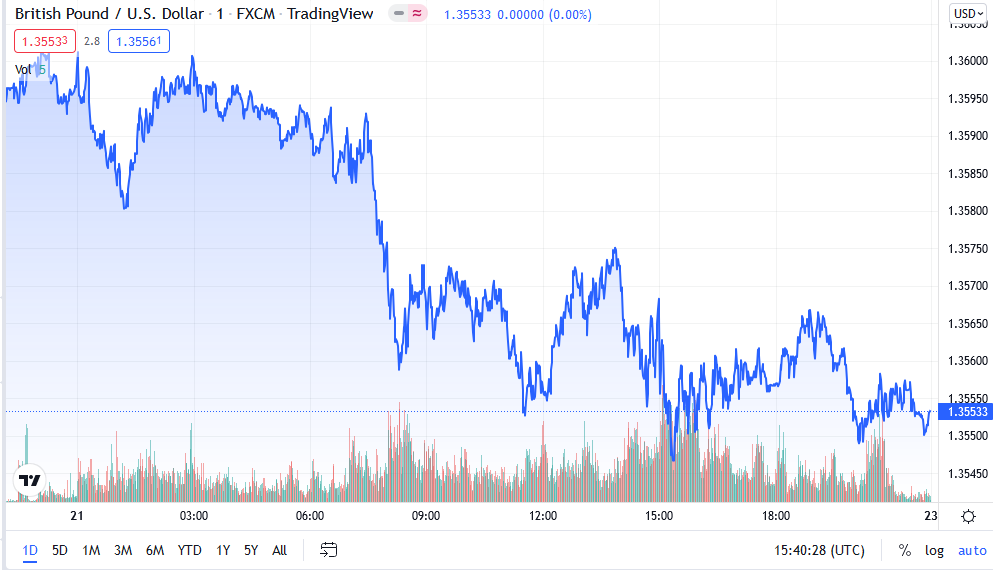 The pound is heading towards recording the first weekly decline against the US dollar with the end of trading today, with losses estimated at 0.8%, with the activity of correction operations and profit-taking, after it recorded its highest level in three months at $1.3748 earlier in trading.

UK retail sales fell by 3.7% month-on-month during December 2021, the worst drop since January of the same year and much worse than market expectations of a 0.6% drop. The drop in retail sales occurred after two months of strong increases, as The rapid spread of the new mutant omicron affected consumer behavior before the Christmas holidays, however, when looking at the whole of 2021, retail sales increased by 5.1%, the highest rise since 2004.

The US dollar witnessed a limited range increase against most of the major currencies in the morning trading on Friday, and the index traded at 95.62 points, adding about 0.1%.

The Philadelphia industrial index rose more than expected yesterday, as the index added about 7.8 points to reach 23.2 during January, exceeding expectations that indicated that the index would rise to 19 expected, after falling significantly in the month of December, the index that dominates expectations for months The next six increased by 9.7 points to 28.7, slightly above the November level.

US Treasury yields continued their decline overnight, with the 10-year yield breaking below the 1.8% level, while the 2-year yield hovering around 1.02%.