GBPUSD continued to achieve gains on Wednesday morning in the European market and recorded the second consecutive daily rise due to the decline of market concerns about the negative impact of the new variable Omicron on the UK economy, especially after the recent British government decision, indicated that it would not impose any additional restrictions on New Year’s holidays and Christmas.

GBPUSD is on the rise again 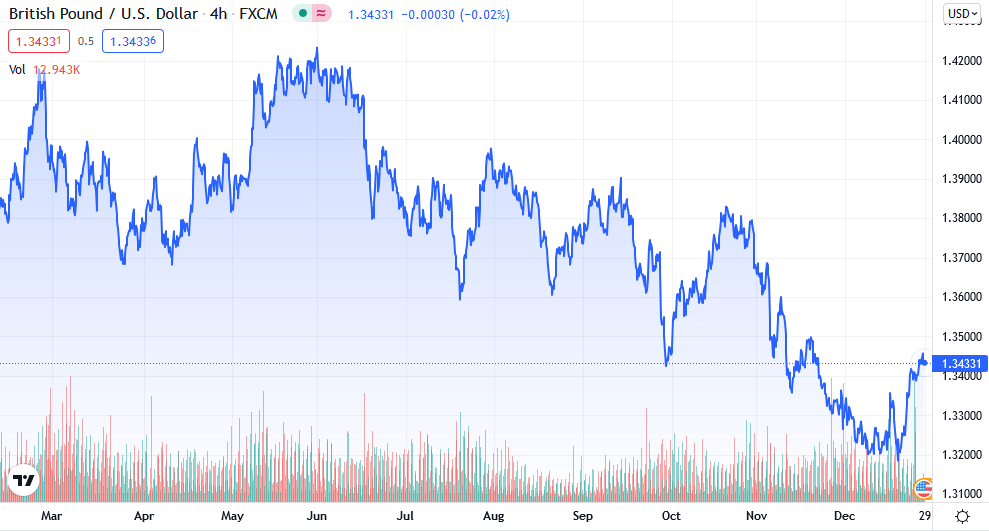 The GBPUSD traded at the level of 1.3282 dollars, adding about 0.4% from the opening level of today’s session at 1.3256 dollars. The pound closed its trading yesterday, achieving the first daily rise in the last three days, in light of the decline of the US dollar against most currencies.

The pound gained some of its gains in recent sessions due to a new government support package worth £1 billion for businesses affected by the Covid-19 virus, and after Prime Minister Boris Johnson ruled out new restrictions before Christmas.

On the data front, UK GDP grew by 1.1% q/q in the three months to September of 2021, less than the 1.3% initial forecast and slowing after a 5.4% increase in the previous period.

The UK’s current account deficit rose dramatically in the third quarter of 2021, reaching £24.4 billion or 4.2% of GDP, well above the forecast £13.6 billion and up from £13.5 billion in the previous period.

The US dollar fell against a basket of major currencies on Wednesday morning in the European session, recording the third consecutive daily decline, in light of continuing tensions over the new fiscal spending project of the US President, and the US economy is expected to release data on a gross domestic product later in the day. For the third quarter of this year, in addition to data related to consumer confidence during the month of December.

The dollar index traded at 96.28 points, losing about 0.2% from the opening level of today’s session at 96.47 points, after it closed yesterday’s trading, losing less than 0.1% for the second day in a row.

Recent days have seen the US dollar drop as concerns mount over the impact of the new pivot Omicron on US economic growth.

In terms of data, the current account deficit of the United States widened to $214.8 billion, or 3.7% of GDP, during the third quarter of 2021, up from $198.3 billion in the previous period and compared to an expected deficit of about $205 billion.

US Q3 GDP data is due later in the day, with the consensus forecast that the US economy will rise by 2.1% QoQ.